The Führer’s Conversation with the American Newspaper Correspondent Karl von Wiegand on June 15, 1940 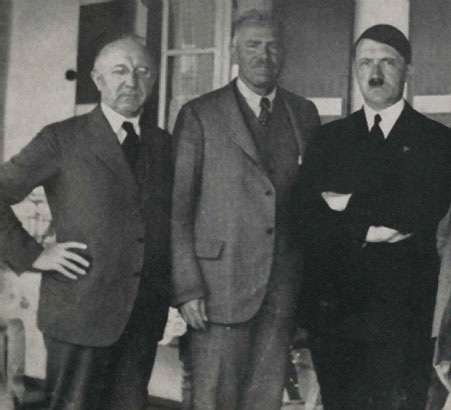 The Führer’s conversation with the American correspondent Karl von Wiegand proceeds from the question of Germany’s attitude toward America. The Führer declares to this that Germany is one of the few states that has previously refrained from any intervention in American affairs.

“Germany has neither previously had territorial or political interests on the American continent nor does it have such today. Whoever claims the opposite, lies deliberately for whatever reasons. How the American continent hence shapes its life”, so stressed the Führer, “does not interest us. This is true not only for North America, rather likewise for South America.

The Führer noted about the Monroe Doctrine:

“I do not believe that a doctrine such as Monroe proclaimed could or can be viewed as a one-sided claim to nonintervention; for the purpose of the Monroe Doctrine did not consist of preventing European states from intervening into American affairs - which, by the way, England, which itself possess huge territorial and political interests in America, continually does -, rather that, likewise, America does not intervene into European matters. The fact that George Washington himself gave such a warning to the American folk confirms
the logic and the rationality of this interpretation. I hence say: America for the Americans, Europe for the Europeans!”

“I hold to the Monroe Doctrine in the answering of this question as swell. I do not judge the USA’s armament program, it also does not interest me. I myself have been forced to work for years on the largest armaments program in the world and can hence distinguish very well between imaginative drivel and the real possibilities of practical life. Very imaginative views seem to prevail on this point.”

To the question of America’s intervention through shipments of airplanes and war material, the Führer replied:

“America’s intervention with mass shipments of airplanes and war material cannot change the outcome of this war. I do not need to give reason for this. Reality will decide about it.”

The Führer summarized his view about the news and reports widely distributed in America about an alleged German fifth column as follows:

“I cannot imagine anything at all about the so-called fifth column, because this column does not exist at all, except in the brains of lunatics or as a phantom invented by propaganda for obvious purposes. If incompetent governments first incite their folks into the war and then experience a pitiful collapse, it is understandable that they prefer to shift the blame to others. The main purpose of this slogan, however, is to create an overall concept for the domestic opposition that naturally exists in every land. This opposition has nothing to do with Germany! Quite the opposite! They are either the most radical nationalists or internationalist oriented communists or pacifists and other war opponents. Solely because these politicians do not manage to deal with their own opposition in a decent manner, do they accuse these elements of treason and in this manner try to wrap their illegal methods in a patriotic cloak to morally justify it before the eyes of the world through the invention of the scary concept ‘fifth column’.

“It was never my intention or my goal”, so declared the Führer further, “to destroy the British World Empire. Quite the opposite, even before the outbreak of the war, which was incited by England and France, I presented proposals to the English government in which I went so far as to offer Great Britain the Reich’s help for the existence of the Empire. I asked nothing more from England than that Germany should be viewed and treated as having equal rights, that England should protect the German coast in the event Germany would become entangled in a war, and finally, that one should return to me the German colonies. And I will also get them!

“One declared and wrote in London before the whole public that National Socialism must be destroyed, that Germany must be divided up and totally disarmed and made powerless. Never have I expressed similar goals and intentions toward England. But after England lost battle after battle, the rulers in London begged America with tears in their eyes and declared that Germany threatens and seeks to smash the British World Empire.

“In this war, however, something will be smashed, namely a capitalist clique that was and is ready to let millions of people be destroyed for its base personal interests. But - of this I am convinced - this will be done not by us, rather by their own folks.”