The film begins in 1813 after the phase of the Napoleonic Wars known in German as the Befreiungskriege (War of Liberation). The opening scenes show Prussian Landwehr and volunteers marching down the streets of Breslau through enthusiastic crowds. This is followed by a dialogue between King Frederick William III of Prussia and Count August von Gneisenau, in which Gneisenau explains that the siege of Kolberg taught the importance of citizen armies. Ending with the admonition that kings who cannot lead must abdicate, the scene switches to Vienna in 1806 to show the abdication of the last Holy Roman Emperor, Francis II of Austria, whom the script has Gneisenau call „an Emperor who abandoned the German people in their hour of need“.

The scene set, the film moves to 1806 and a Kolberg not yet affected by war, where the inhabitants are shown enjoying life, and the town’s leaders, Nettelbeck chief among them, discuss Napoleon’s proclamations, and what it will mean to them. Some see the French victories as a good thing, some wonder whether to leave. Nettelbeck alone is set on resisting the French. The film continues in this vein, with Nettelbeck struggling against cowardice, lethargy and the old-fashioned ideas of the garrison commander, to defend his city against the approaching French. Nettelbeck creates a citizen militia, in spite of the best efforts of the regular army, has supplies collected, and strongly opposes the idea of surrender.

Finally, having been threatened with execution, and convinced that Kolberg can only be saved if a great leader can be found, Nettelbeck sends Maria on the dangerous journey to Königsberg whither the Court of Prussia has retreated, to meet with the King and with Queen Louise, who was described by Napoleon as „the only man in Prussia“. Maria’s journey leads to the energetic and charismatic Gneisenau being sent to Kolberg. After an initial confrontation with Nettelbeck, in order to show that there is only one leader in Kolberg, and that Gneisenau is that leader, the two work together with the army and the citizens to save the city from the French. After Kolberg is (unhistorically) saved, the film returns to 1813 after the Convention of Tauroggen, a time when Napoleon was defeated in Russia, and Prussian leaders wonder whether it is time to turn openly against him. Frederick William is convinced by Gneisenau to do so, and sits down to write the proclamation An Mein Volk („To my People“) announcing the War of Liberation.

The film is based on the autobiography of Joachim Nettelbeck, mayor of Kolberg. Dr. Joseph Goebbels explicitly ordered the use of the historical events for a film, which he regarded as highly suitable for the circumstances Germany faced.

Kolberg entered production in 1943, and was made in Agfacolor with high production values. At a cost of more than eight million marks, it was the most expensive German film of the second World War, with the actual cost suppressed to avoid public reaction. At a time when the war was turning against Germany, thousands of soldiers were used in the film.

Principal cinematography took place from 22 October 1943 to August 1944. The exteriors were shot in Kolberg and environs, Königsberg, Berlin and environs, Seeburg and Neustettin.

To film scenes with snow during summer, 100 railway wagons brought salt to the set in Pomerania. The film was finally completed at the Babelsberg Studios at Potsdam while the town and nearby Berlin were being steadily bombed by the Allies. Two extras were killed during the making of the film when an explosive charge went off too early.

The film opened on 30 January 1945 in a temporary cinema (U.T. Alexanderplatz) and at Tauentzien-Palast in Berlin, and ran under constant threat of air raids until the fall of Berlin in May. Simultaneously with the opening in Berlin it was shown to the crew of the naval base at La Rochelle at the Théâtre de la Ville. It was also screened in the Reich chancellery after the broadcast of Hitler’s last radio address on 30 January. One of the last films of the Third Reich, it never went into general release.

Kolberg was declared a ‘Festung’ (fortress-town), and Soviet forces neared the town on 24 February. Within a month of the film’s opening Kolberg was under full siege (sometimes called the ‘second Siege’, or ‘second Battle’, of Kolberg), with around 70,000 trapped civilians and military. House-to-house fighting caused devastation. Kolberg fell to Soviet and Polish forces on 18 March. Many civilians escaped by sea, and those who survived were permanently expelled along with all Germans in east Pomerania. The ruined town of Kolberg became part of Poland and is now known as Kołobrzeg. 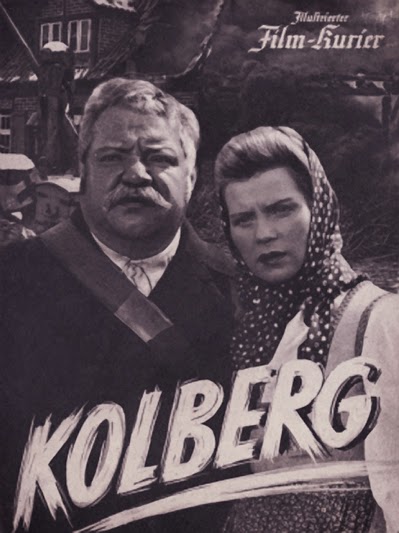 Email ThisBlogThis!Share to TwitterShare to FacebookShare to Pinterest
Labels: Culture and Art